Home News What Does Asbestos Insulation Look Like? [Pictures] 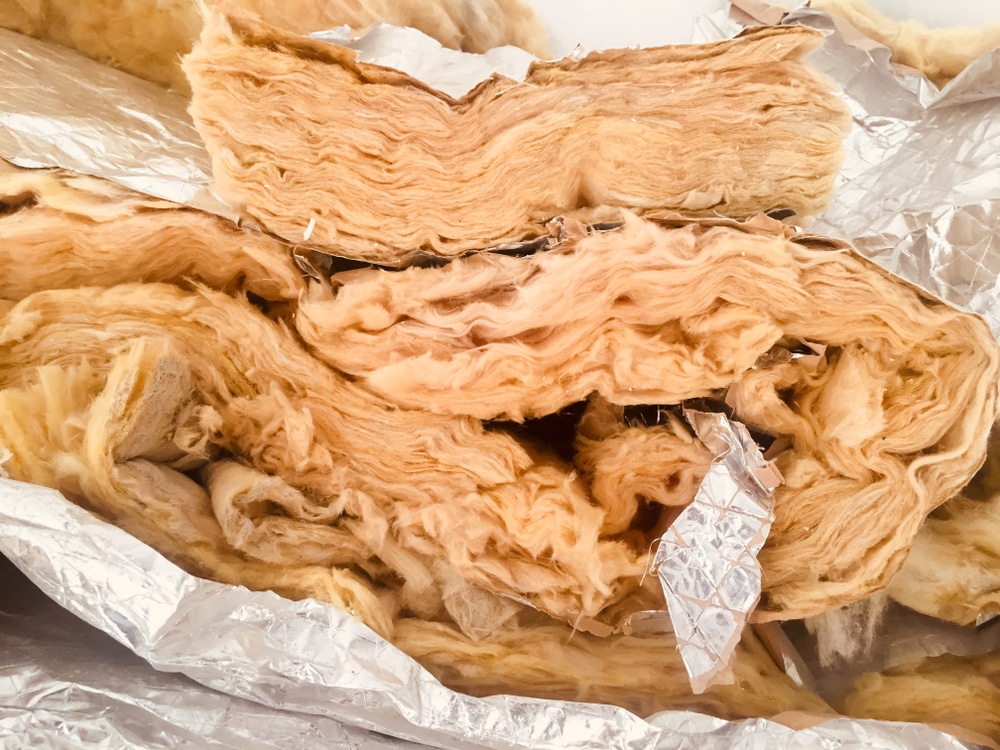 Asbestos was a popular, versatile construction material commonly used for roof insulation. But after discovering that it causes serious health problems if inhaled, it was banned across the planet, and a number of restrictions were put in place against its removal.

But what does asbestos insulation look like, exactly? And where might it be found in an older property?

What is asbestos insulation?

Asbestos insulating board or low-density asbestos fibreboard (LDB) is a lightly compressed board that contains asbestos fibres in a calcium silicate plaster. It was manufactured from the 1950s to the 1970s as perforated sheeting or flat sheets, and typically used for ceiling panels and internal walls for acoustic insulation.

Why is asbestos toxic?

Breathing in asbestos can be deadly and lead to incurable cancers like malignant mesothelioma. Studies have shown that there is limited risk to building occupants with undisturbed asbestos. However, if it is disturbed, damaged or removed without the proper controls and precautions in place, it can release fibres that contain the toxic properties.

How is asbestos insulation identified?

When in good condition, it can be visually difficult to distinguish between LBD and other types of asbestos-containing sheeting. The only way to categorically determine if asbestos is present is to have a specialist consultant inspect and collect a sample for asbestos testing. However, there are a number of tell-tale signs that identify its presence, which we’ll outline.

Asbestos insulating boards can most commonly be identified by looking at the rear side of the sheeting for trade names such as Duralux or Asbestolux. 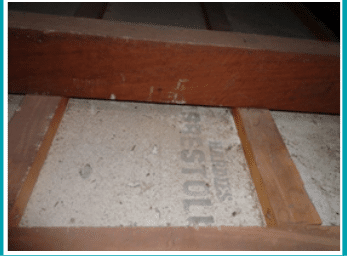 However, the absence of a label does not mean the material is asbestos-free. LBD was also often used as sheets or ceiling tiles for acoustic purposes. They were typically perforated, and had different patterns of perforation with a varying number of holes per sheet. 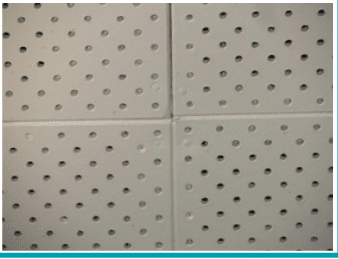 LDB is relatively soft, as calcium silicate plaster was used to bond the asbestos fibres instead of cement. When tapped, it produces a dull sound, and with pressure, the head of a screwdriver will easily dent its surface. 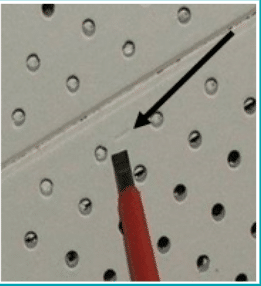 Conversely, asbestos cement sheeting or fibro will produce a sharp or clicking sound, indicating a harder, higher-density product. The head of a screwdriver will also not penetrate the surface and will usually just scratch the paint off.

LDB tends to flex or bend when pressure is applied, and will then tear rather than snap. It is also difficult to remove nails without LDB tearing or it breaking into small pieces. Broken edges typically appear torn or ragged, and the sheeting looks fibrous or furry.

This is opposed to asbestos cement sheeting, which will typically break more cleanly:

The heads of fasteners, clouts or nails and clouts were often embedded or recessed into the surface of LDB sheeting due to the softness of the sheeting. 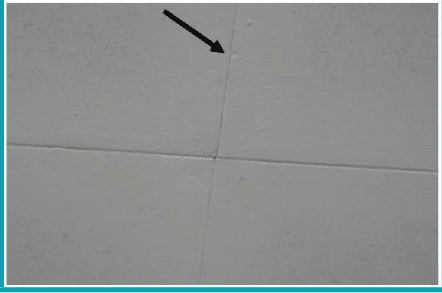 In contrast, the heads of the fasteners in asbestos cement sheeting typically don’t sit level with the surface. 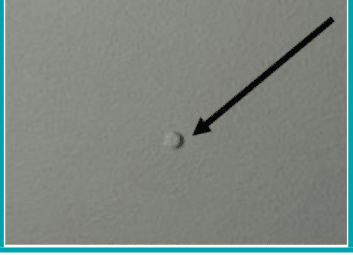 The edges of LDB products were often slanted, bevelled and hand-planed, so when joined together with another sheet, a V-joint finish would be evident.

The joins of asbestos cement sheeting were usually covered over with moulded or flat timber cover strips. 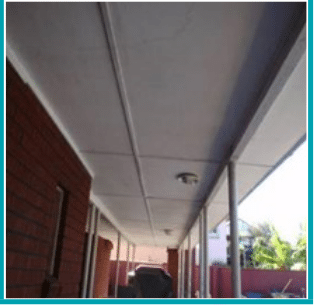 Examples of asbestos used in construction

Asbestos had over 3000 product applications when it was used in the construction of Australian buildings during the 1950s to the 1970s, including:

Asbestos insulation was used in roof and ceiling cavities, and limpet spray (seen in the second image) was applied for thermal insulation and to fire-proof structural beams in buildings. This material can result in an extremely high risk of exposure if disturbed.

Insulating board is considered to be friable (easily crumbled) as it can release asbestos fibres into the air much more readily than asbestos cement. It typically also has a low-density appearance, as seen in the image below. 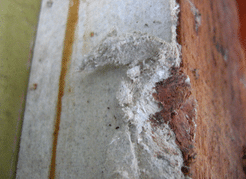 Asbestos ceilings can be found in many forms, which include asbestos fibre cement sheets (fibro) and vermiculite spray-applied ceilings. The vermiculate looks a bit like popcorn! Asbestos ceiling tiles were also commonly used. The first image below shows an asbestos fibro ceiling and the second, a vermiculate “popcorn” ceiling.

Asbestos roofs were typically constructed of a corrugated moulded product that is generally a stable material. However, being a brittle roof, there are other significant issues, which include the potential of falling through the roof by walking on it.

Fibre cement sheeting is the most common and prominent form of asbestos-containing material that is now recognised as being potentially hazardous. However, there were two types used — cement sheeting or insulation board. True fibre cement sheeting is a very hard material. Conversely, insulating board is a softer material and releases fibres much more readily. Asbestos cement sheeting typically has a dimpled, “golf ball” pattern on the back of the sheeting, whereas asbestos insulating board generally has a smoother finish on the back. The first image below shows an external fibro wall, and the second, a wall and ceiling, which are most common in internal wet areas.

The majority of eaves on buildings built before 1990 will contain asbestos, and it is one of the most commonly tested materials. The images below show typical asbestos eaves, which are made of asbestos fibre cement sheeting, also known as fibro.

Gables (the pitched side of roofs) can contain corrugated moulded asbestos products (seen in the first image) and flat asbestos cement sheets (seen in the second image).

Some metal ductwork may contain asbestos in the gasket material that lines the flange joints to provide an airtight seal. Asbestos was introduced to hinder the spread of flames within the ductwork. The first image below shows air conditioning ductwork, and the second, cooling tower ductwork, where the asbestos is located within the flange joints.

Asbestos cement sheet and asbestos insulating board were often used throughout buildings to increase the fire rating and hinder the spread of fire, as shown in the images below.

How asbestos is managed or removed

If LDB is in good condition, it may be managed and the risk of disturbance or damage is low. If not, it should be prioritised for removal as it can release toxic and potentially dangerous asbestos fibres. Maintenance work or the removal of LDB must be done in accordance with Work Health and Safety (WHS) regulations. More information is also provided in the Code of Practice: How to Manage and Control Asbestos in the Workplace, and the Code of Practice: How to Safely Remove Asbestos.

An asbestos removal licence is required to remove any amount of friable (easily crumbled) asbestos and more than ten square metres of non-friable asbestos. Before an asbestos removalist team begins work, they should: