A Guide to Roof Terminology 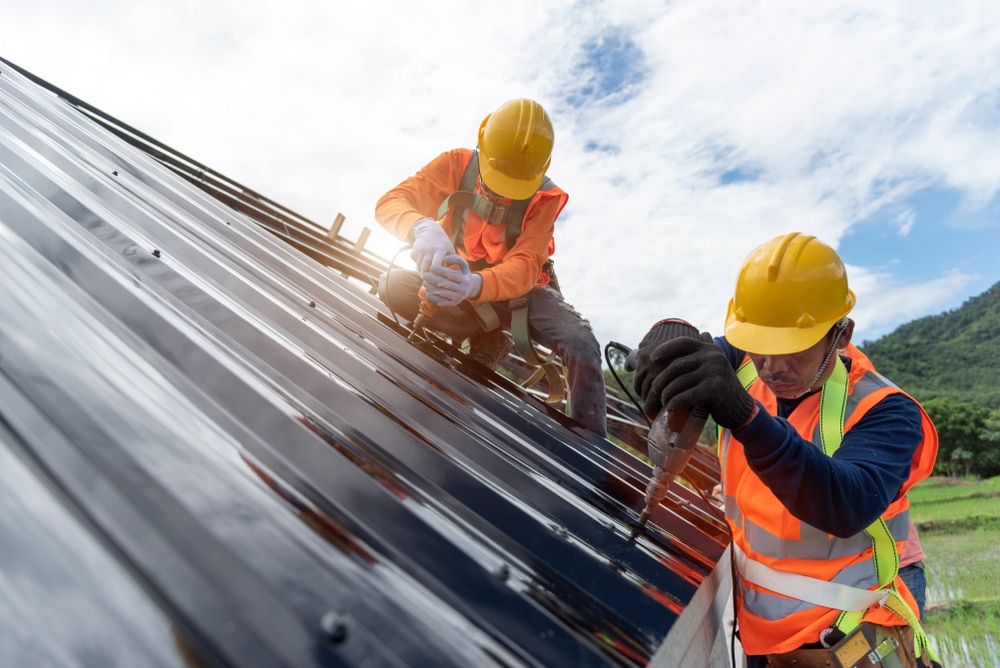 You’ve probably never seen much of your roof’s internal structure—even its external structure can be difficult to see. So, when the tradies arrive and start reeling off words you’ve never heard before, you’ll probably be confused. After all, roofing terminology isn’t the sort of thing that makes its way into most people’s everyday vocabulary. That’s why we’ve collated some common roofing terms that you might hear when the roofers arrive at your home.

Gutters are an obvious place to start, and we’re confident that you’re familiar with what they are, and where they go. But they form an indispensable part of almost all roofs, so we can’t exactly leave them out. Gutters are designed to collect and guide rainwater from your roof into an appropriate drainage system. They’re clearly visible in most homes, and they skirt the bottom edge of almost all roofing structures. Without them, water would run straight off your roof and onto the ground, where it would cause erosive damage and potentially allow water to seep beneath your home. Well-maintained gutters are an essential roofing component.

Eaves are often thought of as architectural additions to a roofing structure, rather than an important structural addition. So, what exactly are they? Eaves protrude from the main structure of a building to prevent rain from running directly down the side. They can come in ornate and decorative varieties, or they can come in standard forms, but either way they are a vital part of any home’s roofing structure. They form the overhang of your roof, which keeps rainwater clear of windows and walls.

Rafters are arguably the most important part of any roof structure, and there’s a simple reason for that: they form the structure. Rafters are usually timber structures that attach to the downslope perimeter, eave, or wall plate, and create the ridge (or apex, as you’ll see below) of the roof. In conventional houses, rafters are configured parallel at equal intervals. That configuration allows them to bear the weight more evenly, and stabilise the roofing structure.

Tie-down rods are a uniquely North Queensland roofing fixture, but you can find them in a lot of southern Queensland homes too. Tie-downs are metal rods designed to keep roofs cyclone-resistant. When a powerful cyclone strikes, roofing sheets can vibrate at a rate of up to 1000 times per minute. That can loosen fixtures and sometimes tear the roofing sheets off completely. Tie-downs prevent that by fixing the roofing structure to the foundational structure of the house itself. They are affixed to the roofing structure, and run directly to the foundation of the building through the internal walls, which allows the roof to withstand the tremendous force of cyclones.

Insulation comes in all shapes and sizes, and it’s an integral part of roofing – and not just because it keeps you comfortable! Insulation moderates heat transfer within roofing cavities, which means that there’s less heat stress on sensitive components within your roof, such as electrical fixtures. The two main categories are bulk and foil reflective. Bulk uses tightly wound fibres to trap innumerable tiny air pockets, which then insulate your roofing cavity. Reflective foil, on the other hand, reflects radiant heat within your roof to prevent it from becoming too hot.

The most common sort of insulation in Queensland is batts, which are created from bulk insulation. Insulation batts are effectively large sheets of a fibrous product, usually made from polyester, glass wool, or rock wool. However, there are different types of insulation that you can choose from, and they often make their way into roofing terminology, so it’s worth knowing what’s around.

Flashing is a roofing term used to describe a waterproofing structure installed by roofers where water can seep through. Where a roof meets a vertical structure, there’s a natural weakness: the join. It’s challenging to create an entirely waterproof join between two metal products, or a metal product and a timber product. So, rather than rely on sealants alone, roofers use flashings to divert water away from potential points of ingress. The most common type of flashing material is thin zinc or colorbond steel, which is used for its rust resistant properties. Flashing isn’t reserved for vertical points of ingress, either. It’s frequently used with gutters to prevent overfilling, or to prevent water flowing out of the gutter and onto vertical surfaces where it could potentially do damage.

Abutments are essentially a combination of flashings and eves. They are common in houses with multi level roofs, and they’re designed to fortify the lower-level roof from potential water seepage. They do so by overhanging the second roof and diverting water from the join between the lower roof, and the vertical face of the building. Abutments are also common over windows and doors, for the same reason: they are points of potential water leakage, and an abutment diverts water away from them.

The term strut isn’t limited to roofing terminology—it’s a generic construction term used to describe load bearing beams. Roofing struts are no different. They’re used to prop up the rafters, in conjunction with an underpurlin or bearer. The underpurlin is a large beam that runs horizontally and perpendicular to the rafters. The strut is then affixed vertically to the underpurlin, to create an internally stabilising structure within the roofing cavity. The downward weight of the roof is borne by the strut, but distributed evenly by the underpurlin, which means that the roof is better equipped to withstand both downward forces, and sideways forces such as wind.

This one is simple: the apex is the point of your roof. Where your two roofing sheets meet in the middle, you will find the apex of your roof. It usually works in a similar way to flashing, by diverting water away from a potential point of ingress. A combination of diversion and angle is used to ensure that water does not sit on any one point of your roof for too long, and that process begins at the apex.

So far, we have the rafters and the apex, but how do they combine? That’s where the ridgeboard comes into play. The ridge board runs horizontally, just below the apex, and forms the highest ridge at which the rafters meet, hence its name. The ridge board is normally a heavy timber beam that is supported by the rafters, rather than an independent strut.

Battens are common in roofing terminology, and they’re easy to confuse with insulation batts, despite being a different roofing component. Roofing battens are the structures to which your roofing itself is affixed. The battens are usually lengths of hardwood or pine, or in newer roofs zincalume top hat steel. They run horizontally, and you’ll find them parallel to the underpurlin. That means they’re installed in a similar way, screwed to the rafters. Battens are important because they keep the roofing off the rafters themselves. Because rafters are timber, they are susceptible to deterioration if subjected to unfavourable conditions such as damp, or heat. By fixing the battens to the rafters, and then the roofing to the battens, roofers ensure that the rafters are well-ventilated, and if any water does get in, it won’t collect in between the rafters and the roof itself.

The location and design of a top plate differ from one house to another, depending on design. In block homes, the top plate is usually found atop structurally reinforced columns within the block walls. For timber-framed homes like Queenslanders, it might be found atop structural timber, or a steel column. Of course, if you’ve got tie-downs in your roof then the top plate won’t be the only point at which the main structure and roofing structure are joined. But there’s a key difference: the tie-down is not load-bearing, and the top-plate is.

Trusses are effectively a combination of rafters, underpurlins, and struts, and they look like a triangular cross-section of the roofing structures we have described so far. The term ‘truss’ is becoming more prevalent in roofing terminology, because of shifts in the way homes are being built. As home construction intensifies in the outer suburbs, construction techniques are shifting towards efficiency. With prefabricated trusses, you can construct a roof structure very efficiently, by simply installing them in sequence, and connecting them with underpurlins and battens. The trusses can simply be trucked onto site, and affixed quickly by professional roofers.